Tangisahi village in the Nayagarh district of Orissa welcomes you with bright sunflower field at the entrance of the village. The villagers greet the gram vikas staff and photographers with warm smiles and fresh papayas.

A village meeting was held as an open, general discussion. All the villagers were present for the meeting. 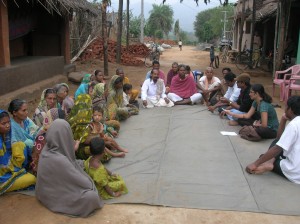 The women lined up on one side of the carpet and the men on the other. When asked, how they got to know about the water & sanitation project, it was explained that the President of the village had seen the facilities in his relatives house in the Ganjam district where the project was implemented by Gram Vikas. Thus, he decided to introduce this program in his village also.

He spoke to everyone in the village and got an acceptance from all. He then contacted Gram Vikas for the implementation. The project was successfully implemented and everybody now has access to safe and clean water for bathing & drinking.

Some have even improved the facility: Utam Jani made it easier for herself to clean vessels by hooking up a garden hose to the bathroom tap – a simple innovation. 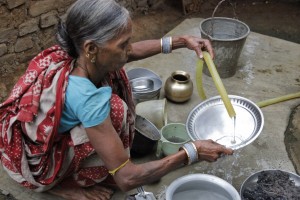 In hindsight old customs die hard. During menstruation women go to the well for water. They then use this water to bathe separately. When asked to explain about the practice, we were told that they have been following this practice for a very long time. The belief is that the women are impure during this time of the month. And so would not want to contaminate the clean water, as this water is offered to God.

When compared to the state of affairs in the villages before the intervention, particularly in the tribal villages there have been a lot of improvements in the quality of life. However, age old customs and traditions are still followed in the tribal villages.  But Gram Vikas has to work its way around some of these.

Tribal villages are often neglected as these communities are small in numbers. More often than not they are excluded from the government schemes because they are unaware as to what is available to them. Gram Vikas works on the policy of “inclusion” and thus believes that the community size is not a limiting factor when it comes being included in any welfare schemes.

Dusashyan Jani is a farmer who tends his nearby fields. 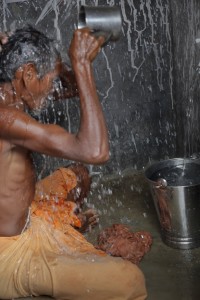 After which he comes home and takes a sacred bath. He then offers water to the Tulsi plant, (It has religious significance and also healing power) a ritual practised for centuries, bringing fortune to the person.

Thus “water” is just not water in these villages, it fullfills various needs of the tribal people  in more than one way. The important thing is that Tangisahi village now have access to clean water which always seemed impossible. 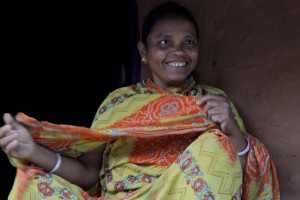 Bimala Jani, a resident of Adivasi Colony in Ganjam district of Orissa has five children – three boys and two girls. She talks excitedly about how happy she is with the new water and sanitation facilities in her village.

This project is implemented only if every single household in the village agrees to participate and contribute in every stage of the project. She talks about the “inclusion” process and explained that initially two families in her village were against the water & sanitation project.  Even with Gram Vikas’ earlier successful livelihood projects, getting every families agreement for this project proved a challenge.   This project was proposed much earlier in this village – nearly ten years ago. Due to internal conflict among the villagers the project could not materialise and take shape at that point in time. Nevertheless, Gram Vikas made repeated attempts to convince the people of this village to take up the program.

An interesting observation can be made from what Bimala Jani says. She says that two families in the village were not convinced for a very long time.  The President of the Adivasi Colony conducted a village meeting and explained the benefits of availing this facility, having seen the benefits in the different villages. It took a week of serious discussion to get a positive response from everyone. This program was being implemented in the neighbouring village (Indra Colony) where the benefits of the piped water system and sanitation facility were clear. The women in those villages were happy to make use of the facility and were the best demonstration for Adivasi colony: word of mouth spread across this village about the benefits of the new facility. 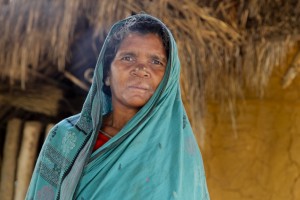 Chanchala Jani, who has two boys and five girls, adds that she had to collect water from the well which was 200 meters away from her house at least five times a day. Not only was this a lot of hard work, but also decreased the amount of time she had to earn extra income and just to sit and relax. She also explains that the people in the village realised that the water from the well was creating sickness but they had no        other source of water for drinking and bathing.

When asked what she does with her extra time now, she says she just relaxes and watches television and also adds extra income to the family by leaf-plate making.

Blue Planet Network has supported the water supply system in this village. 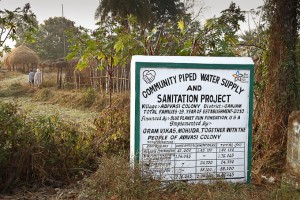 Gravity flow system is the first option in all the villages to supply water.  This reduces the cost as no electricity is used in the process while people still enjoy piped water at the turn of a tap in their houses!  The water source is at a height from the water tank, thus the water is directly pushed into the water tank because of the pressure.  However, in this village the water has been supplied directly from the well without a water tank! This was an experiment done in this village as the number of households was less. The experiment was successful. This was then taken to the other villages with more families from then on.

Adivasi colony has only nineteen households, out of which two households were not convinced about the project. Because the numbers were so small, it was easier to get everyone to agree to this project especially as there was a lot of awareness amongst the villagers about the benefits of the program. The advantage was that the first hand benefits were visible in their neighbouring village.

On the other hand it becomes a herculean task for Gram Vikas when the number of household increases and the task becomes even more daunting when it is a non-tribal village, as the issues of caste and class come up. Gram Vikas is fighting hard to overcome all these barriers and make water available to more people in the inaccessible areas, most importantly where the government has limited reach.